The Alamo Heights Swimming Pool, also known as the Heights Pool, is a characteristic public swimming pool for outdoor swimmers nestled in the municipality of Alamo Heights. It is a point of pride for residents in the area and includes numerous recreational facilities for non-swimmers.

The History of Alamo Heights

The pool is a feature of the Alamo Heights incorporated city. The area of Alamo Heights has its own city government despite its geographic location and connection to the infrastructure of the city of San Antonio.

In 1922, leaders in the community called on Alamo Heights citizens to vote on whether or not the area should have its own city government. On June 4, an overwhelming vote of 289 to 8 put the city on the map.

After annexing Bluebonnet Hills in 1928 and Sylvan Hills in 1944, Alamo Heights attained the borders it still has today. It is largely a residential municipality with little commercial or industrial development.

To protect the personality and style of the city, ordinances were put in place to restrict zoning and building height. Short, low-density construction allowed the natural beauty of Alamo Heights to continue to draw residents.

Construction of the Alamo Heights pool finished in 1947. It began as a popular recreational spot for families, but popularity waned as San Antonio grew around the city. Larger parks and pools with quick access overshadowed the small town charm of the local pool.

City officials called for the closing of the pool in the summer of 1989. Visitor numbers plummeted once it became clear that the grounds were in disrepair. However, the charm of the pool and its strength as a symbol of the city’s character attracted the attention of investors.

In 1990, Heights Pool Ltd. gained maintenance and operation rights to the pool. They renovated the swimming area, reworked the recreational equipment, and beautified the surrounding land. It is now a cherished part of the Alamo Heights city and one of its biggest attractions.

Besides its draw as a family oasis in the heat of the Texas sun, the pool sports unique recreational facilities as well as food and drink options.

Visitors to the pool can enjoy entertainment and lounge equipment around the pool, including:

The pool also offers private or group swimming lessons and hosts the Pool Sharks swim team. For those who just want to relax and enjoy the warm Texas weather, there is also Free WiFi available. Admission to the pool is by season pass only. 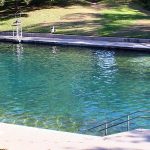 How To Accent Your Pool AreaUncategorized
Call Now