Barton Springs Pool at Austin’s Zilker Park is a large, man-made pool popular among Austin citizens year round, especially during the summer months. The water in the pool is fed by the city’s famous Barton Springs, keeping it cool in the summer and warm in the winter.

What is Barton Springs?

Barton Springs is the system of 4 natural springs underneath Zilker Park. The springs were formed by flow from Edwards Aquifer, a natural limestone aquifer that collects rainfall.

All of the water that comes from Barton Springs begins as rain water. It is naturally filtered and incredibly pure. Like most natural springs in Texas, it maintains a consistent temperature between 68 degrees Fahrenheit and 71 degrees Fahrenheit year round.

Where Did Barton Springs Pool Come From?

Before the pool was turned into a tourist attraction, the Tonkawa Native Americans settled the area. The tribe of about 5,000 used the springs for intensive healing rituals.

The Tonkawa were able to interact with Spanish settlers who built a mission near the springs before they were forced to migrate to Mexico in several battles against neighboring Native American tribes. In 1824, they allied with the city of Austin in a battle against the Comanche tribe.

After the battles, the Republic of Texas claimed its independence 1836. William “Uncle Billy” Barton settled the area in 1837 and named the springs he found there after his daughters. The main spring was named Parthenia and became the source of Barton Springs Pool’s water. William Barton named the 2 other springs Eliza and Zenobia.

William Barton recognized the springs’ value as a swimming hole for tourists and began promotion for visitors. Andrew Jackson Zilker continued the tradition of marketing the swimming hole after he acquired the land. He sold the land to the city of Austin in 1918.

After the city had taken over the land, city leaders began projects to increase the swimming area by setting up dams in the springs and creating walking paths for visitors.

A bathhouse was also constructed around the year 1940 to resemble the bathhouse at Deep Eddy Pool. After the city projects were finished, Barton Springs Pool has remained largely untouched except for regular maintenance and beautification.

The pool is now 3 acres in area and stays open for year-round swimming. The pool is frequented by actors, legislators, Austin residents, and tourists who have numbered up to 800,000 in a single year.

It is the exclusive home of the Barton Springs Salamander, an endangered species which makes its home in the springs. Those who visit Barton Springs Pool can learn about the ecology of the pool and the surrounding area at Splash! near the pool’s bathhouse.

The pool’s floodgates are closed during visiting hours so that Barton Springs can fill the Barton Springs Pool to its maximum height. Tunneling underneath sidewalks helps control the maximum depth of the pool.

Entrance to the pool is free for the months of November through March, but a minimal fee is required from the second half of March through October. Even during months when a fee is charged, admission is free after 9:00 PM. The pool stays open from 5:00 AM to 10:00 PM from Friday to Wednesday.

The pool is regularly maintained and is closed once a year for a few weeks for deep cleaning. Steps, ramps, walls, and walking surfaces must be cleaned of algae and the water has to be tested for pH balance and contamination.

See the Austin Official Website for more information or call the City of Austin at 512-867-3080. 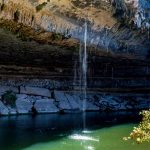