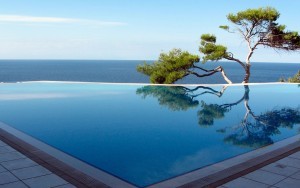 In Texas where the scorching summer temperatures often hit the triple digits, it’s not uncommon for people to have swimming pools in their backyards. But have you ever heard of someone turning their backyard into an entire water park ?

That’s exactly what Hal Jones, a man from Austin, did with his home pool. Jones reportedly spent about $2.2 million dollars to build a total of four pools on his property next to Lake Travis. The incredible project includes a giant hot tub (it can hold 30 people!), a kiddie pool, a Lazy River, an infinity pool, waterfalls, a 60-foot high waterslide, and even a swim-up bar. According to Jones, he built the pool to share with friends and members of his community. It sounds like it’s getting its fair share of use, as Jones states that at one point over 450 people were swimming in it at once!

Proving that things really are bigger in Texas, the larger-than-life pool holds over 190,000 of water. The costs of maintaining the pool are pretty substantial as well: monthly bills often reach $5,500 even before paying staff and bartenders! In addition, electricity bills usually run the owner an extra $3,500 each month.

But the costs are worth it for Hal Jones. Despite the high operating costs, he calls the pool “an investment” and estimates that the pool is worth about $3.2 million now, a million more than what he initially put into it.

As pool designers and builders, we always love to see what creative innovations others dream up for their own pools. You may not want or need a pool that can accommodate 450 people, but if you want to get started on building your own backyard oasis, contact Sanchez Pools in San Antonio today at 210-732-5202.